“Natural” Movement and the Delsarte System of Bodily Expression 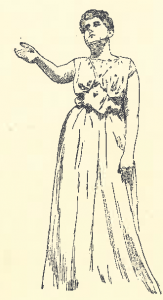 In 1892 Edward B. Warman published a book on the Delsarte Philosophy of Expression entitled Gestures and Attitudes. A practical as well as a theoretical compendium, this thick tome is a nineteenth-century precursor to the self-help books of today. In his introductory remarks on Delsarte’s philosophy, Warman explains: “The Delsarte system is founded on the great principle of the law of correspondence; that is, every expression of the face, every gesture, every posture of the body corresponds to, or is but the outward expression of, an inner emotion or condition of the mind, be it one of beauty or one of ugliness” (23).

Because one’s outside movements correspond to inner feelings, it is crucial to understand the interpenetration of mind, body, and soul. Thus, in order to move beautifully, you must think beautiful thoughts, and your heart must be compassionate as well. Interestingly enough, however, the practical exercises proffered by the various Delsarte manuals also suggest the opposite. Cultivating these three dimensions was considered as much of a science as an art in the nineteenth century. By refining one’s bodily attitudes and striking the “correct” poses, one can also experience the appropriate internal feelings, inspiring one’s self and one’s audience to a better life. The implications were that even if you were not born into an educated milieu, you could learn to affect the right stance and actually accede into a more sophisticated level of society, providing a pathway for social mobility, exemplified by the life story of Irene and 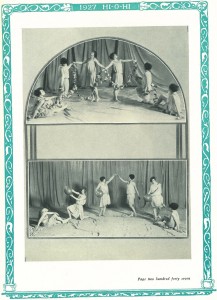 Although one’s comportment must look “natural” – not fake or contrived – this graceful bearing is a result of analysis and serious study. Like the nineteenth-century British gardens, “natural” in this context means cultivated, not wild. As Warman notes: “There are three co-essential elements of grace – precision, harmony, and ease. Precision of movements is mental, harmony of movement is emotive, ease of movement is vital” (349). If we recognize that every gesture and motion in the Delsarte system corresponds to an intellectual, emotional, and physical state, we can infer the values which were considered important at that time by looking at and inhabiting the exercises these manuals suggest. (See pdf in Classroom Activities below).

Martha Banta wrote a book called Imaging American Women in which she analyzes the way advertising and the popular media evoked that particular brand of energized femininity. In her chapter entitled “The Purchase of Grace,” Banta connects Delsartian principles to late nineteenth-century American culture. “Among these predilections are the classification of physical and spiritual types; interest in reciprocal relations between habit and will; unembarrassed borrowings from classical art and philosophy; preference for formulas that order personal and public lives; enthusiasm for scientific methods of self-advancement; insistence that every meaning has its clearly recognizable sign; beauty defined as outer repose and inward vitality; demands that artful expression be joined to spontaneous emotion; appeals to women to free themselves from society’s self-demeaning control over their bodies and dress” (643). In the following sections, we shall see how many of these very same themes relating movement, health, self-improvement and an artistic sensibility are taken up in the dancing, autobiographical writings and artistic manifestos of Loïe Fuller and Isadora Duncan.

Warman, Edward Barrett. Gestures and Attitudes; an Exposition of the Delsarte Philosophy of Expression, Practical and Theoretical. Boston: Lee and Shepard, 1892.