Social Reform and the Disenfranchisement of Devadasis 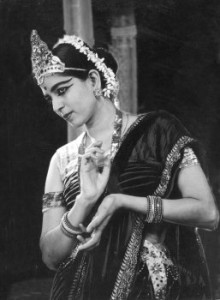 the nineteenth century, reform activity related to women in colonial India was widespread. Issues such as sati, widow remarriage, and the Age of Consent were prominent in public debate, judicial process, and eventually, in the twentieth century, nation-making. Devadasis always held a somewhat ambiguous place in South Indian society, and reform movements that arose as responses to colonial critiques of Hindu social and religious practices questioned their anomalous status, especially the non-conjugal sexual relationships they had with men.

In the 1890s, Indian “reformers” began a social purity movement that dislodged the devadasi from her social space, and re-configured her as a morally inferior, diseased, fallen woman. The movement against devadasi practices was known as the anti-nautch movement. The word nautch is an Anglicized form of the Hindi nach, simply meaning “dance.” Devadasi dance was sometimes referred to as “Tanjore Nautch,” and the term nautch eventually came to stand for any genre of public dancing by a female. The “anti-nautch” movement begins in South India as a struggle for the middle-class to orient all female in the service of the home and nation. The restriction of women’s lifestyle choices to Victorian sexual norms also resonated deeply with indigenous Brahmanic patriarchy. By the 1920s, the anti-nautch movement had reached its apex, and many devadasis were forced out for their homes and into urban rehabilitation centers that sought to “domesticate” them. Also by this time, a process of criminalizing devadasi lifestyles had also been ushered in by the Madras Legislative Assembly, headed by English-educated Dr. S. Muthulakshmi Reddy, herself born to a Brahmin father and devadasi mother. In 1947, the same year in which India became independent, the new nation passed the Madras Devadasis (Prevention of Dedication) Act of 1947 that criminalized the marriage of women to deities, and outlawed the performance of dance in public by devadasis. 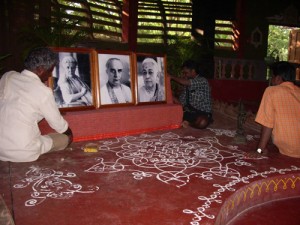 At the same time, anti-colonial nationalism necessitated the presence of symbols, artifacts and figures that could represent distinct cultural dimensions of the emergent nation. In the 1930s, largely due the influence of Western dancers and the Theosophical society, nationalist reclamations of the art of the devadasi had begun. Upper-caste women, such as Rukmini Devi Arundale (1904-86) began to learn the dance, largely from nattuvanars. Rukmini Devi in particular reworked the aesthetics of the dance, from designing a new costume inspired from temple sculptures with the help of European designers, to creating “dance-dramas” based on Sanskrit and vernacular religious narratives.
Located within a new definition of Indian womanhood that brought together nationalist fervor and upper-class religion, the dance was crowned with the Sanskrit name “Bharatanatyam.” Indeed, naming is an important issue in the context of the reinvention of India’s performing arts in the middle of the twentieth century. Although “Bharatanatyam” was one of the many names current in the indigenous community of the dance’s hereditary practitioners, it was also the name that was selectively foregrounded by Indian elites who appropriated the dance from the 1930s onward. The dance’s other names – sadir, chinnamelam, dasiyattam, mejuvani, kelikkai – were vernacular, or non-Sanskrit terms. The name ‘Bharatanatyam’ simultaneously referenced both the idea of the nation (Bharata in Sanskrit), and also the mythic author of the Sanskrit text called the Science of Drama (Natyashastra), and thus enabled the nationalization (and eventually the global travels) of these reinvented performance practices.

These reclamations also involved a transformation of the technique and textual content of the dance. Although much of the content of Bharatanatyam derived from the court repertoire as designed by the Thanjavur Brothers, this new form of dance represented itself as a “temple art,” which gave it legitimacy and distanced it from the social reality of the devadasi. The erotic aspects of the devadasi repertoire were either deleted or re-worked through the rhetoric of non-dualistic Hindu philosophy (advaita vedanta). Today Bharatanatyam continues to circulate as the “Sacred Dance of India,” closely linked to national identity and new understandings of Hindu spirituality — an art engineered and packaged for international consumption in the context of globalized modernity.

Srinivasan, Amrit. 1988. “Reform or Continuity?  Temple ‘Prostitution’ and the Community in  the Madras Presidency.” In Structures of Patriarchy: State, Community and Household in Modernising Asia, ed. Bina Agarwal. Delhi: Kali for Women.

Previous Page: Thanjavur and the Courtly Patronage of... | Next Page: Technique
Use tags to explore the content of Accelerated Motion thematically.
Tags : writing assignment