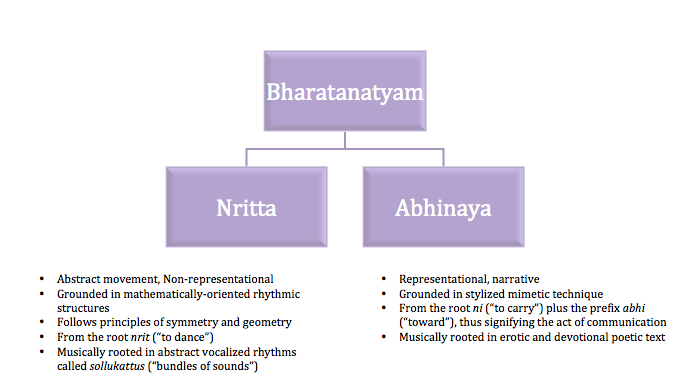 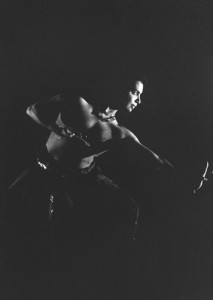 The basic unit of movement in Bharatanatyam nritta is called adavu from the Tamil √ adu (“to dance”). These basic movements as we see them today, were first codified in a Sanskrit text written at the Thanjavur court entitled The Nectar of the Essence of Music (Sangitasaramrita) in the eighteenth century. The movements usually involve all of the major limbs of the body, and are accented by decorative hand gestures which do not carry any meaning. A typical adavu is divided into several “steps,” each indicated by a different vocalized rhythm (sollukattu). An example is given below:

Abhinaya in Bharatanatyam consists of a kind of stylized vocabulary of gestures. The basic sites connected with these gestures are the face (mukhaja-abhinaya – abhinaya which is “born from the face”) and the hands (called hasta-abhinaya – abhinaya which is “located in the hands”). Hand gestures (also called hastas or mudras) are of two kinds: single-hand gestures (asamyuta) and combined-hand gestures (samyuta). The meaning of the gestures is almost entirely derived from context. The same gesture — the one called hamsasya, for example — can refer to concepts and objects as unrelated as a swan, dew-drop, truth, time, nose-ring, and bee. Images of some single- and combined-hand gestures are given below:

As we have already seen, the thematic content of most of the traditional repertoire of Bharatanatyam focused on love and eroticism. Consider the song-text of this popular javali, a short and brisk genre, composed by the poet Mysore Venkatarama Sastri in the nineteenth century:

Didn’t I tell you not to, girl?
Not to have anything to do
with him?
He pretends to be nice, but look
he’s already involved with someone else.
Like some slick lord, he
talks politely
But he goes and acts just
like a fox; don’t get involved
with a rogue like him.

(trans. Phillip B. Wagoner in Viswanathan and Allen 2004) 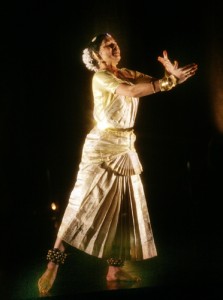 Performances of abhinaya involve not only a literal, word-for-word representation of the text or poem, but also the creation of an improvised “commentary” on the text. This “commentarial” elaboration is called sanchari-bhava (“feelings produced while wandering, roaming about”). The dancer may take up a line from the poem and elaborate upon it, while the musicians sing the line over and over again. Each repetition references a new thought or situation related to the line of text that is being elaborated upon. Traditionally these presentations of sanchari-bhava be very complex, and the quality of the sanchari-bhava was an index of the performer’s virtuosity. Expert dancers can interpret a single line for as long as half an hour.

Previous Page: Social Reform and the Disenfranchisement of... | Next Page: New Dance for New Audiences: The Global...