Martha Graham’s Steps In The Streets

Subtitled “homelessness – devastation – exile,” Martha Graham’s 1936 dance Steps in the Streets depicts the aftermath of some terrible tragedy.  Images seen in the dance can easily be linked to contemporary displacement of people during the 2008 earthquake in Sichuan Province, China, ongoing fighting in Iraq, or the 2005 Hurricane Katrina disaster in New Orleans.

Read: You might begin your study of Steps in the Street by asking students to read selected excerpts from Studs Terkel’s Down and Out in the Great Depression aloud or playing Woody Guthrie’s music for the students.

Expand: Discuss the Great Depression and the impact it had on the American people. Ask students to describe the images they researched by Walker Evans or Dorothea Lange.

Watch: View Graham’s Steps in the Street and ask students to observe with the following in mind: What movement elements do you see in the dance: spatial patterns (for example, straight line, circular, rectangular, lines at right angles), body shapes, and different movement qualities, i.e. light/strong, fast/slow, direct/indirect? How is protest embodied in this dance? Describe the movements. How is meaning created? Shape? Pattern? Contrast? How are the individual and the group contrasted? Who does the artist identify with?

Discuss: What does it Steps in the Street tell us about 1930s America? Do you see any similarities between the images you looked at by Walker Evans and Dorothea Lange?

Move: Divide the group in half and form several lines, standing shoulder to shoulder, 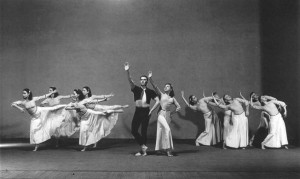 scattered randomly throughout the space. As one student walks around the space, the students in lines should block his or her progress. Note: It is important to emphasize that students may not touch each other. Students should take turns being the “one against many.”

Reflect: Ask students to discuss their experiences as part of the group and as the individual moving into a group of people. What does it mean to be one against many?