In the 1890s Loïe Fuller created an extraordinary sensation in Paris with her manipulations of hundreds of yards of silk, swirling high above her and lit dramatically from below. She embodied the fin-de-siècle images of woman as flower, woman as bird, woman as fire, woman as nature. One of the most famous dancers of her time, Fuller starred as the main act of the Folies Bergère, 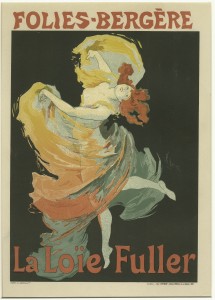 inspiring a host of contemporary fashions and imitators. Fuller’s serpentine motif is also visible in much of the decorative imagery of Art Nouveau.

Like many of her contemporaries, Isadora Duncan felt the draw of Europe and soon she left for London and then Paris where she first saw Loïe Fuller dance at the 1900 Universal Exposition. Duncan was deeply influenced by the Hellenistic revival in the late-nineteenth century and her evocation of classical Greek culture helped elevate dancing from being mere entertainment to being considered an art in its own right.

Many discussions comparing the work of Loïe Fuller and Isadora Duncan quote Louis Vauzcelles’s famous quip: “Isadora sculpts, Loïe paints. Useless to compare them” (qtd. in Albright 159). Indeed, Fuller and Duncan are often portrayed as the polar opposites. If Fuller is aligned with theatrical artifice and modern technology, Duncan is seen as the embodiment of nature and the ancient Greeks. If Duncan is mythologized standing, waiting for divine inspiration, Fuller is pictured with her sleeves rolled up, ready to experiment with the latest lighting effects. If Fuller is categorized as a modernist, Duncan is seen as a romantic. Fuller’s body disappeared under a mass of silk, while Duncan’s body was shockingly revealed by her light tunics. One was perceived as androgynous or masculine, the other as highly feminine. And yet in Paris at the beginning of the twentieth century, both dancers were seen as enterprising, independent, and eminently 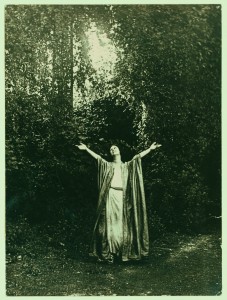 American women. If we shift the dynamic of their comparison from an either/or to a continuum, we can begin to discuss their differences and similarities without setting up a hierarchy of importance.