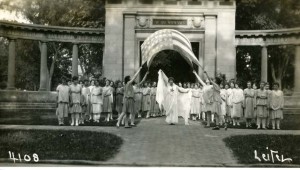 Just as Irene Castle, Isadora Duncan, and Loïe Fuller influenced the fashion and movement of the times, the influences of “natural dancing” and Delsarte began to make their way into higher education. Oberlin College, a small liberal arts school in Ohio, proved to be a pioneer in this regard. While some colleges banned dancing as “indecent,” in 1885 Oberlin hired Delphine Hanna, making her the first female professor of Physical Education. Using her medical and dance training as guides, Hanna developed the first four-year degree program in Physical Education. The program was exclusively for women in its early days.

Inside the classroom, the students developed a strong, scientific basis of technique. They put on yearly pageants, often performed outside, which would allow the community to witness their dancing. The pageants were performed to classical music and often had natural or historical themes. Hundreds of students were involved in these pageants. The 1927 pageant “Our Lady’s Juggler” was so popular that a repeat performance was created in 1939. 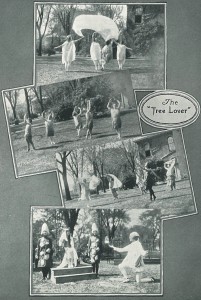 However, fashions change. As the larger dance world began to experiment with more pared down movement, structure, and gesture, Oberlin followed suit. Dance at Oberlin has continued to evolve, staying at the forefront of movement of the time from the advent of Graham to the development of experimental dance in the 1970s.