Thanjavur and the Courtly Patronage of Devadasi Dance 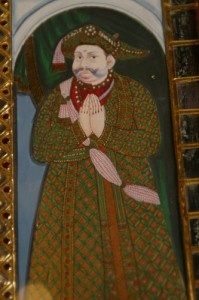 In the year 1799, the English-educated king of Thanjavur, Serfoji II (r. 1787-1832), signed a treaty with the East India Company. From then on, Thanjavur was a British province, though the king and family were guaranteed certain privileges, including an annual income of twelve hundred thousand rupees, and the right to collect revenue in a few towns. Serfoji himself commissioned nirupanas – clusters of court dances in the Marathi language that included a series of new dance genres such as serva, tarana and triputa along with existing genres such as varnam, abhinaya pada and sabda – couched in the context of a linear narrative presentation. These were written down in the form of Marathi texts referred to by their Tamil name, korvai (“link” or “chain”). Building on the already existing genres such as those from the Marathi nirupanas commissioned by Serfoji, a group of fourdance-masters known as the Thanjavur Brothers (tanjai nalvar) created a systematized format for the hitherto diffused and somewhat random presentation of court (or “concert”) dance. 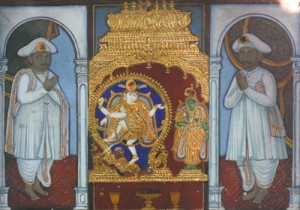 Their re-visioning of the court repertoire consisted of seven primary genres: alarippu, jatisvaram, sabdam, varnam, padam, javali and tillana. The ethos of this repertoire was situated within the courtly aesthetic realm of bhoga (enjoyment), with the primary agent in the poetry of the songs being the dancing woman herself. By the nineteenth century, the dance had a hybrid vocabulary and was a regular part of courtly displays of ritual at the Thanjavur palace.

Serfoji’s son Sivaji II ascended the throne in 1832, and in 1856, the kingdom was fully annexed to the East India Company. With this, cultural patronage in the city of Thanjavur officially collapsed, and most dancers and musicians moved to Madras city, turned to the smaller feudal kingdoms (zamindari samasthanams) for patronage, joined emergent Tamil theatre companies, or left the practice all together.

Previous Page: Nattuvanars | Next Page: Social Reform and the Disenfranchisement of...
Use tags to explore the content of Accelerated Motion thematically.
Tags : hybrid, patronage