Moving into the Twentieth Century

As the nineteenth century morphed into the twentieth century, many young women were embracing a much more physical lifestyle. They were inspired by the growing alternatives to the psychological and physical restrictions of Victorian society, which had sought to restrict women to the home or farm. Buoyed by social movements such as dress reform, health fads that emphasized the importance of exercise and fresh air, as well as a burgeoning sensibility for “aesthetic movement,” these women made the critical connections between an active, healthy physicality and an independent spirit. The “new” woman was liberated from the corset along with the hearth as bodily self-support led to a greater sense of self-sufficiency. Suddenly the phrase “strong woman” was no longer an oxymoron. 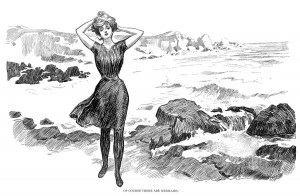 Charles Dana Gibson was a well-known artist whose black and white sketches of lively young American women quickly became iconic of the changing look of American femininity. The “Gibson Girl” was youthful and active, often pictured outdoors riding a bike or swinging a tennis racket. She was, in the words of Fairfax Downey, “a pretty American girl speeding joyously along on a bicycle. On that simple machine she rode like a winged victory, women’s rights perched on the handlebars and cramping modes and manners strewn on her track” (qtd. in Banta 88). Two decades later much had changed in American culture, and Irene Castle, a famous ballroom dancer, was the new icon of a woman in motion (partnered by her husband, of course). Irene Castle had famously bobbed her hair, and her loose, flapper-style dress allowed even more freedom of movement in the legs and arms. 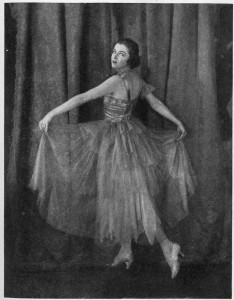 From the perspective of the 21st century, it is hard to comprehend how vivid and viscerally exciting changes in everyday transportation were to most people used to walking or riding in a carriage or horse and buggy. The massive expansion of railroads and the increasing availability of wheeled transport (including motor cars) radically altered people’s experience of time and space. This accelerated speed of travel meant that journeys that used to take a week or more could now be accomplished in a day. In addition, individual appetites for movement expanded as the whole world seemed to explode into motion in the first decades of the 20th century. In his essay “Torque: The New Kinaesthetic of the Twentieth Century,” Hillel Schwartz surveys a myriad of cultural discourses to show how many aspects of life were influenced by new ideas about movement. “Over the new century, between 1840 and 1940, children and adults would slowly be rehearsed into a habit of gesturing and a repertoire of ‘streamlined’ gestures central to the new kinaesthetic – clean, fluid, curvilinear gestures moving from the center of the body outward through uninterrupted but muscularly well-controlled rhythmic impulses” (Schwartz 91).