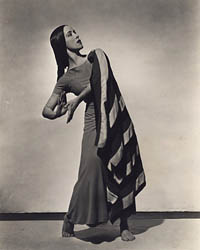 Martha Graham’s dance theater piece, American Document (1938), featured text written by the choreographer. It was revised by Graham in 1989 and inspired a new work of the same name created by the Martha Graham Dance Company and Ann Bogart’s SITI Company in 2010. All of these iterations sought to ask “What is an American?”

Discuss: Talk about what becoming “American” might mean for immigrants arriving in the United States, in the past and in the present. Ask students to comment on the different perspective of the First and Second Episodes.

Write: Free-write a response (5 minutes) to the American Document text, asking students to pay particular attention to their experiences of becoming “American.” (How) Do they identify themselves as Americans? Does the history present in American Document resonate with them?  List documents, events, attitudes, social and cultural practices such as holidays, material goods and the like that contribute to that identity. Do they know people who have come to America as immigrants?  What about their own families? Discuss their experiences.