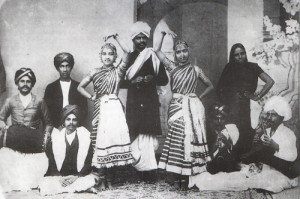 The term nattuvanar connotes a man who accompanied the devadasi dance in the capacity of a dance-master, music conductor, and vocal percussionist. In pre-modern South India, particularly among the Tamil-speaking devadasi communities, the nattuvanar would train the dancer and would also join her during the performance by reciting vocalized rhythms (sollukattu). The primary visual marker of the nattuvanar was the talam, a pair of small hand-cymbals that he would beat in consonance with the footwork executed by the dancer. Some of the most famous nattuvanars served in the Thanjavur court. The ancestors of the Thanjavur Quartet, for example, had been serving as nattuvanars in the Thanjavur court since the seventeenth century. The nattuvanar tradition, however, is not the only instance of male involvement with devadasi dance. Ritual specialists, such as otuvars (men who recite the hymns of the Tamil Shaiva poets), as well as court poets and other upper-caste composers regularly interacted with devadasis, especially in the eighteenth and nineteenth centuries. 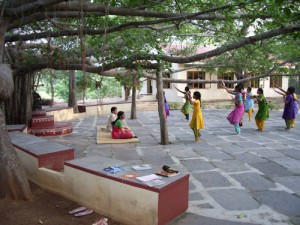 The nattuvanar community also became stigmatized as a non-Brahmin community of performers during the social reform movement, but unlike the devadasis, they continued to receive patronage from the new community of urban practitioners who approached these men (and not the devadasi women) for technique and repertoire to create the contemporary form known as “Bharatanatyam.”

Previous Page: Devadasis | Next Page: Thanjavur and the Courtly Patronage of...
Use tags to explore the content of Accelerated Motion thematically.
Tags : music, rhythm