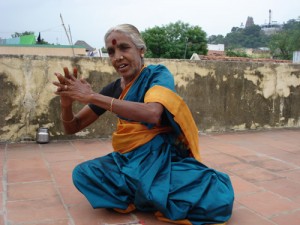 The generic Sanskrit term devadasi (“servant of god”) refers to a multiplicity of female communities, known by regional names such as devaradiyal (“slave of god”), bhogam (“embodiment of enjoyment”), kalavati (“receptacle of the arts”), and gudisani (“temple lady”). The women of these communities were the hereditary proprietors of a cultural practice that emerged as “Bharatanatyam” in the early part of the twentieth century. Devadasis performed in temples, royal courts, and at private soirees of the elite classes, often held on occasions such as marriages. Each of these contexts had its own set of dance and music compositions, though there was also a natural overlap, and technique and texts could sometimes be transferred from one context to another.

The most artistically developed of dances were performed in the royal court and not in the temple. The court or salon repertoire was variously known as chaduru or sadir (“performed before an audience”), melam (“troupe” or “band”), mejuvani (“entertainment for a host”), kaccheri (“concert”) and kelika (“play”) in nineteenth and early twentieth-century Tamilnadu and Andhra Pradesh. This court repertoire forms the basis of the modern art form known as Bharatanatyam. This suite, consisting of seven major compositional genres, was crystallized by four brothers, known as the Thanjavur Quartet in the nineteenth century, in the Maratha-period court of the city of Thanjavur. It displays a logical and gradual unfolding of the form, and provides a balanced representation of the two elements of nritta (abstract dance) and abhinaya (mimetic dance). The majority of dance compositions in the traditional repertoire were meant to be somatic exegeses on poetic texts that were usually erotic in nature. Longing, separation, and union were the core situations that characterized the poetic texts that were performed in courtly and salon contexts. 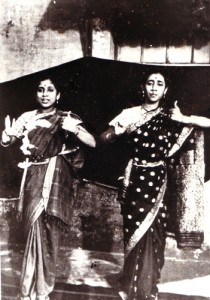 Devadasis were socially anomalous women. Some women from the devadasi community were ritually married to temple deities in a ceremony called bottukkattudal (“tying of the bottu [marriage emblem]”) and thus were considered to be set aside from the rest of Hindu society. After the bottukkattudal, they were usually entitled to a small income or tax-free land (called maniyam) from the temple or the feudal kingdom in the region. They often lived in matrifocal households, and usually took on male partners of their choice. The children born out of such relationships would live in the homes of their mothers, aunts, sisters and cousins. Female children could be dedicated for temple work or could live within the devadasi household as non-dedicated performers. Male offspring could become musicians for the women in the community or could leave the household after marriage. Many devadasi women did not undergo a marriage to a deity, but also performed in the context of court and home concerts.

Beginning in the mid-nineteenth century, a series of social reforms were ushered in by reform-minded Indians that dislodged devadasis from their traditional socio-cultural and religious roles. Devadasis were equated with prostitutes because they did not fit into the new paradigms of womanhood that were being enforced by Victorian colonialism and a nationalist resurgence of indigenous patriarchy that valued women’s domestic roles. Today, the art of the devadasi community has emerged on urban stages in India through a complex process that re-named and re-structured it, and the women of the devadasi community have been severely marginalized and socially and economically disenfranchised.