Bharatanatyam is the name given to a courtly form of dance that was also practiced in some temples in South India. Prior to the 1930s, the art was the preserve of a professional community of artists known in the Tamil-speaking regions as melakkarar (“artists of a troupe or guild”). These included women (called devadasis) who performed dance and their male musicians and dance-masters (nattuvanars). In the eighteenth and nineteenth centuries, these artists performed dance and music at a range of sites – courts, salons of the landed elites, marriages, and temples, particularly during calendrical festivals. The women in these communities were in many ways equivalent to courtesans, and usually did not have conventional marriages. Instead, they had relations with elite men, and were often the life-long mistresses or second wives of these men. 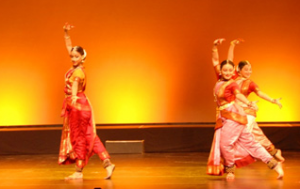 By the end of the nineteenth century, this lifestyle came under scrutiny byIndian elites, colonial administrators, and others, and by the middle of the twentieth century, a number of legal interventions criminalized the culture of the devadasis. But the dance itself was incorporated into the world of emergent Indian nationalism. In order for the dance to become “respectable” enough for non-devadasi women to perform it, it had to be purged of much of its content, and its relation to devadasi communities. This task was accomplished by a number of women in the 1930s and 1940s, and the dance had become institutionalized with a completely new pedagogy in Madras city by the end of this period. It became a prominent mark of middle class identity in urban India, and also was deployed as a symbol of India’s civilizational accomplishments.

Today Bharatanatyam moves in ever-shifting global directions and has grown well beyond the historical debates surrounding its reinvention in the early twentieth century, even though traces of the anxieties over nation, body, sexuality, and performance still circulate in the practice of the form. This unit considers the importance of Bharatanatyam’s multiples pasts for its seemingly infinite futures. Students will develop an understanding and appreciation of the composite identities of Bharatanatyam dance through an examination of both its historical and technical dimensions. From its origins in its courtly home — the town of Thanjavur, South India — the form has developed into a fully transnational art, and the story of its transformation is central to understanding its aesthetic dimensions.