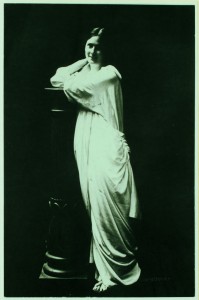 Isadora Duncan was born in California in 1877 into a free-spirited, artistic family. She and her mother, brothers and sister lived in San Francisco where they taught social dancing until Isadora decided to try a career in the theater. Eventually Isadora persuaded her mother and siblings that she needed to follow her artistic destiny first to Chicago and then to New York City, where she worked briefly in the renowned producer Augustin Daly’s theater company. Like many of her contemporaries, Duncan felt the draw of Europe and soon she left for London and then Paris where she first saw Loïe Fuller dance at the 1900 Universal Exposition. Duncan was deeply influenced by the Hellenistic revival in the late-nineteenth century and her evocation of classical Greek culture helped elevate dancing from being mere entertainment to being considered an art in its own right.

The video below shows Duncan’s choreography.

Learn more about Isadora Duncan and her work.

For more extensive information and resources about Duncan outside of this site, visit the Dance Heritage Coalition’s website.