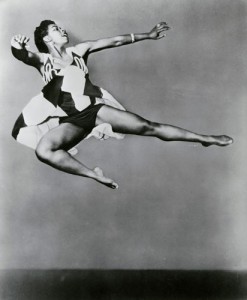 Pearl Primus (1919-1994) was born in Trinidad and moved with her family to New York City when she was three years old. While she was growing up, her family instilled in her a sense of the cultural heritage of her West Indian and African roots. When she became interested in studying dance, she was advised to look into the New Dance Group, a collective of dance artists who were committed to using concert dance to effect social and political change.  She was the first black student to receive a scholarship at the studio in 1941, and her association with the organization was fortuitous because the teachers encouraged her to explore her own interests in social activism through dance.
She made her professional debut in 1943 with a series of solos that established her as one of the most promising young modern dancers of the period. Primus made abstract dances (Margaret Lloyd mentions some of these, including Trio and Study in Nothing) and dances that dealt with African-American experience and racial oppression such as Strange Fruit (1943), The Negro Speaks of Rivers (1944), and Hard Time Blues (1945). In 1949, under the auspices of a Rosenwald Fellowship, Primus was able to pursue eighteen months of research in Africa where she combined her training in dance and anthropology. She returned to Africa numerous times during her career, and she molded her love for the art and culture of the African diaspora into a distinguished career as an artist, educator, and social activist.

Learn more about Pearl Primus and her work.